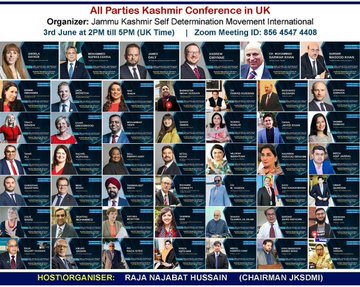 In what could be described as a one sided affair, a Pakistan-backed anti-India webinar was called by Kashmiri separatists based in the United Kingdom this week where people from Indian side of the state were not invited to participate or talk. Despite repositioning of the Labour Party’s stand on Kashmir issue by party head Sir Keir Starmer in bid to woo Indian voters, top politicians of the UK-based party attended the webinar which was organized by the Jammu and Kashmir Self Determination Movement International (JKSDMI), led by Chairman Raja Najabat Hussain.

Fawad Hussain Chaudhary, Pakistan”s Science and Technology minister and Debbie Abrahams, who is a member of Parliament from Oldham East and Saddleworth constituency and known for her anti-India stance, were among those who participated in the digital seminar.

Even Debbie Abrahams, who had criticised India’s decision related to Article 370 in Kashmir, was stopped at the Delhi Airport in February and deported to Dubai.

Debbie Abrahams was not allowed entry into India.

On her arrival at the Delhi Airport, she was told that her e-visa had been rejected.

She visited Pakistan next and was treated there as a state guest.

Debbie ’s visa was revoked as government authorities had strong reasons to believe that she had links with individuals and outfits working for Pakistan’s spy agency, ISI, to run anti-India propaganda, reported Times Now.
Meanwhile, sources said the webinar had no participation from Jammu and Kashmir or even by people from Dogra or Shia community.

“Presence of large number of Pakistanis, including officials and diplomats whereas no invitation was sent to other side shows the biased and pre- determined agenda,” sources said.

“They removed many people who asked questions, thereby making it a nice social club without any meaning,” the source added.

Sajjad Raja, Chairman of The National Equality Party JKGBL, said he was neither allowed to participate or invite to be part of the seminar.

“There is an All Parties Kashmir Conference in UK being held from 2 till 5 pm today, organised by JKSDMI. But the real stakeholders like us (the only party that exist in all divided parts of the State) have neither been invited to the conference nor being let in to participate,” he tweeted.

Another Twitter used, whose ID is named as Al iskandar, said: “This so called All Parties Kashmir Confrence in UK first invited people from various sections to discuss Kashmir Issue, When i start speaking & exposing Pakistan propoganda on Kashmir infront of world leaders they (Pakistani Host) Immediately removed me from the webinar meeting.”